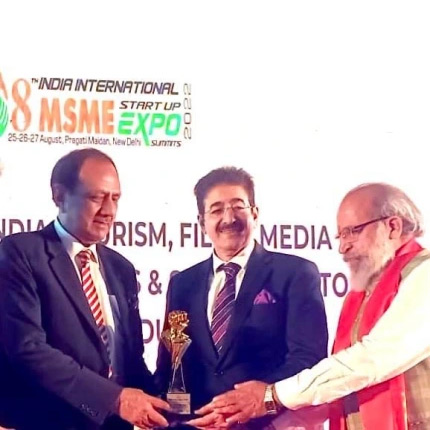 New Delhi: We are more than happy to honor Dr Sandeep Marwah founder of Noida Film City, President of Marwah Studios and Chancellor of AAFT University of Media and Arts for promoting tourism to his best at the international level.

Dr Marwah has been chairing large number of organizations and representing now 67 countries of the World in India as far as art, culture and tourism is concerned. He is the managing director of National Federation of Tourism and Transport Cooperatives of India Limited. A well-known tourism school under the banner of AAFT School of Hospitality and Tourism in Noida and full developed department on tourism in AAFT University of Media and Arts at Raipur id working in his guidance.

“Dr Marwah has established a term “Film and Cultural Tourism” 30 years back and to promote the term he has been able to attract more than three million people to Noida Film City. He deserves a much bigger award,” said Rajnish Goenka BJP leader and from Ministry of MSME, Government of India at the 8th India International MSME Startup Expo-Summit 2022 at Pragati Maidan organised by Government of India while presenting the award in a huge function in the presence of many international delegates from all over the World.

“I am thankful to Ministry of MSME for recognising my efforts and honouring me at such a great level,” expressed Dr Sandeep Marwah.