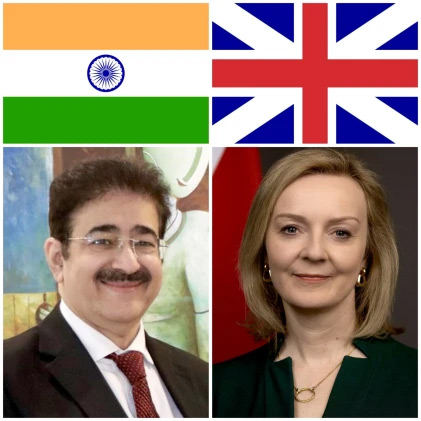 London: I myself and on behalf of Indo UK Film and Cultural Forum extend our heartiest congratulations to Rtn Hon Mary Elizabeth Truss on her being appointed as the Prime Minister of United Kingdom. We wish her a wonderful and powerful tenure as Prime Minister,’ said Dr Sandeep Marwah President of International Chamber of Media and Entertainment Industry and Chair Indo UK Film and Cultural Forum.

Elizabeth Truss was appointed Prime Minister on 6 September 2022. She was previously Secretary of State for Foreign, Commonwealth and Development Affairs from 15 September 2021. She was appointed Minister for Women and Equalities on 10 September 2019. She was elected as the Conservative MP for south west Norfolk in 2010.

Elizabeth was Lord Chancellor and Secretary of State for Justice from July 2016 until June 2017. She was Chief Secretary to the Treasury from June 2017 until July 2019. Elizabeth was previously Deputy Director at Reform. She also worked in the energy and telecommunications industry for 10 years as a commercial manager and economics director, and is a qualified management accountant.