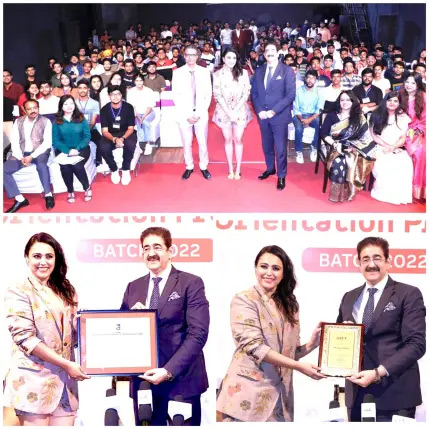 Noida: “There is no alternate to hard work and continuous persuasion. Only those people have attained success in this industry who all have never let their spirits die. If you have talent, you should be confident to get recognition in this industry if not today but for sure tomorrow,” said Swara Bhaskar while lighting the ceremonial lamp at the inauguration of new session of AAFT School of Cinema at Marwah Studios Noida Film City.

“We are happy to receive Swara Bhaskar at AAFT campus. The visit was long due. She is not only a perfect actor but also a wonderful human being. Her presence has added a lot to the acting course and school of Cinema. Her vast experience and deep knowledge of acting can be seen in her master class with School of Cinema,” said Dr. Sandeep Marwah President of AAFT.

The Master Class was followed by large number of question answers by the cinema students. Later Dr. Sandeep Marwah presented memento and life Membership of International Film and Television Club of Asian Academy of Film and Television to Swara Bhaskar.