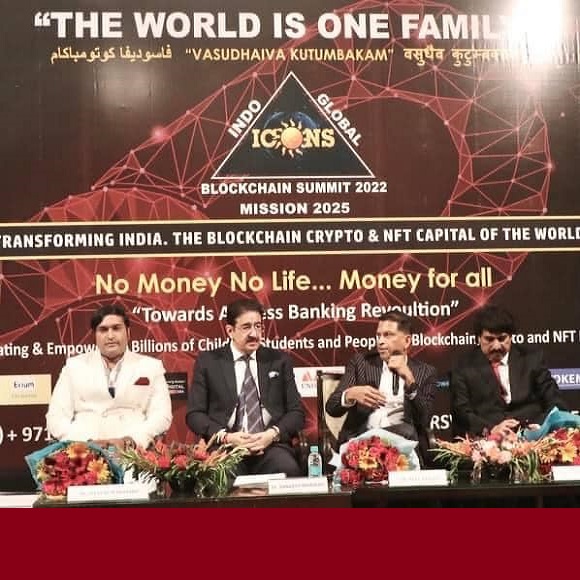 Noida: “Blockchain is a system of recording information in a way that makes it difficult or impossible to change, hack, or cheat the system. A blockchain is essentially a digital ledger of transactions that is duplicated and distributed across the entire network of computer systems on the blockchain,” informed Dr. Sandeep Marwah initiating the session on Block Chain conducted by International Chamber of Media and Entertainment Industry in association with AAFT at Noida Film City.

“Blockchain increases trust, security, transparency, and the traceability of data shared across a business network — and delivers cost savings with new efficiencies.,” added Dr. Prof. Sadhic Muhammed Chancellor European Digital University UAE talking about his mission to teach -what Blocking is all about to one million people in the next few weeks.

“Blockchain is the technology that enables the existence of cryptocurrency (among other things). Bitcoin is the name of the best-known cryptocurrency, the one for which blockchain technology was invented. Microsoft, Amazon, Tencent, Nvidia, J.P. Morgan, Walmart, Alibaba, PayPal, Samsung and the Bank of China are among the 27 companies with live blockchain operations,” explained Dr. Neel Sawant Chairman of Erium Coin from USA. Dr. Viney Reddy Vice Chancellor of European Digital University also attended the session.

“Blockchain is a foundational technology: It has the potential to create new foundations for our economic and social systems. But while the impact will be enormous, it will take decades for blockchain to seep into our economic and social infrastructure,” expressed Dr. Marwah answering to the question raised by the students of AAFT. Later Dr. Marwah honored the dignities with the life membership of World Peace Development and Research Foundation.