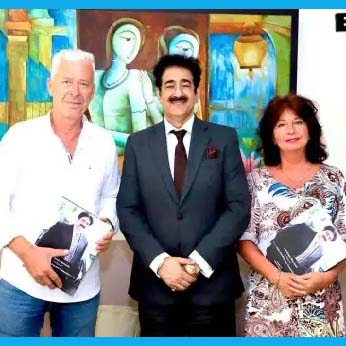 Noida: “We are happy to receive renowned tourism consultant and a film maker from Hungary today to discuss as to how we can take the Indo Hungarian Film and Cultural Forum to next level. We have established our links with number of Hungarians during my last few visits to different cities of Hungary specially the capital Budapest,” said Sandeep Marwah President of Marwah Studios and Chair for Indo Hungarian Film and Cultural Forum.

“The tourism has become much larger in numbers and quality. Sandeep Marwah has been talking about Hungary many times on different platforms. His contribution is immense as he is representing large number of organizations. We are here to invite him once again to visit Hungary at his convenience,” said Edit Osko tourism consultant from Budapest.

Sandeep Marwah is the only Indian who has been honored Eight times in Hungary for his contribution to films, television an media. His support in promoting Hungarian locations for Cinema and Television programs is large. Indian film makers have been shooting in Hungary quite a lot in last few years since the formation of Indo Hungarian Film and Cultural Forum,” said Ferenc Borbely renowned actor, Film & TV Producer from Hungary.