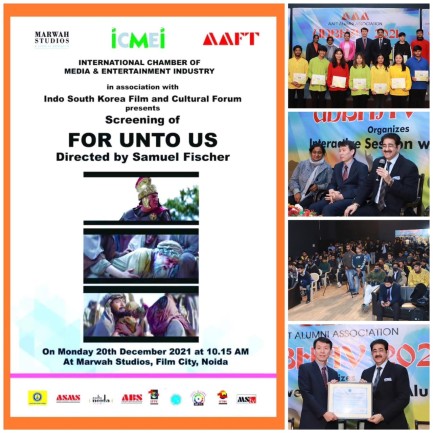 Noida: The premier show of film “For Unto Us” produced by International Youth Fellowship of South Korea directed by Samuel Fischer was screened here at Asian Academy of Film and Television at Noida Film City for the students of Cinema.

“We have always believed in the sincere education at AAFT, that is the reason the management has decided to have Premier show of our film FOR UNTO US for India at AAFT. It is the story on Jesus This is a film adaptation of the highly acclaimed Christmas Cantata concert by Gracia. The film has costed three hundred thousand dollars” informed Paul Song Director India for International Youth Fellowship.

The film is being released at the right time of Christmas; the effect of the film has to be powerful. It does not matter what language you have expressed yourself in Cinema, the real language of Cinema is Emotions,” said Dr. Sandeep Marwah Chancellor of AAFT University formally inaugurated the cinema.

The screening was followed by question answers session with the cinema students. Later Dr. Marwah honoured Paul Song with the life membership of World Peace Development and Research Foundation of Marwah Studios. The event was planned by Indo South Korea Film and Cultural Forum and International Chamber of Media and Entertainment Industry.