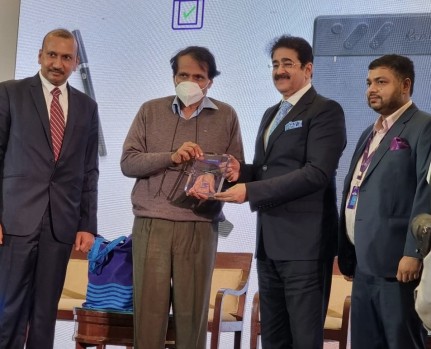 New Delhi: Renowned film, television and media personality Dr. Sandeep Marwah has been rated as the top ten best education Leaders of India. His vast experience in the field of education & training has brought the institution – AAFT University to new heights. We are proud to honor him said Taniya Tikoo Editor-in -Chief of OberveNow at the award function presented by Credenc and Camu.

The award was handed over by Suresh Prabhu MP and former Union Minister Government of India in the presence of Naveen Mittal IAS Commissioner, Collegiate Education & Technical Education, Government of Telangana, in a grand summit on Higher Education at Hotel Shangrila, where educationists were representing best of the institutions from all over India.

“I am humbled by the award. This is one of the best awards I have received where the jury has nominated me as the top ten best education Leaders of the country. This award has given me new energy to add a lot to the education,” said Dr. Sandeep Marwah thanking organizers and the Chief Guest Suresh Prabhu.