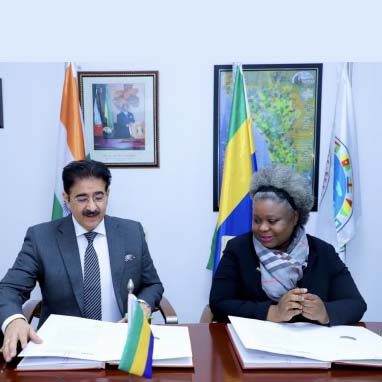 New Delhi: A MOU was signed between the Embassy of Gabon in India and ICMEI-International Chamber of Media and Entertainment Industry on Wednesday, the 15th December 2021 to develop and promote relations between the two countries India and Gabon through art and culture.

“We have wonderful relations with Republic of India and now we are very keen in developing our relations with India in soft power including films, television, media, art, culture, education, tourism. Signing MOU with ICMEI is the first major step in series,” said Patricia Ntyam Ehya Charge d’ Affairs Embassy of Gabon in India.

“It is a matter of great pride for all of us at ICMEI to be the part of this historical moment of MOU signing ceremony between two countries India and Gabon. We will leave no stone unturned to make this MOU a vibrant one and action packed exercise,” said Dr. Sandeep Marwah President of Marwah Studios and ICMEI.