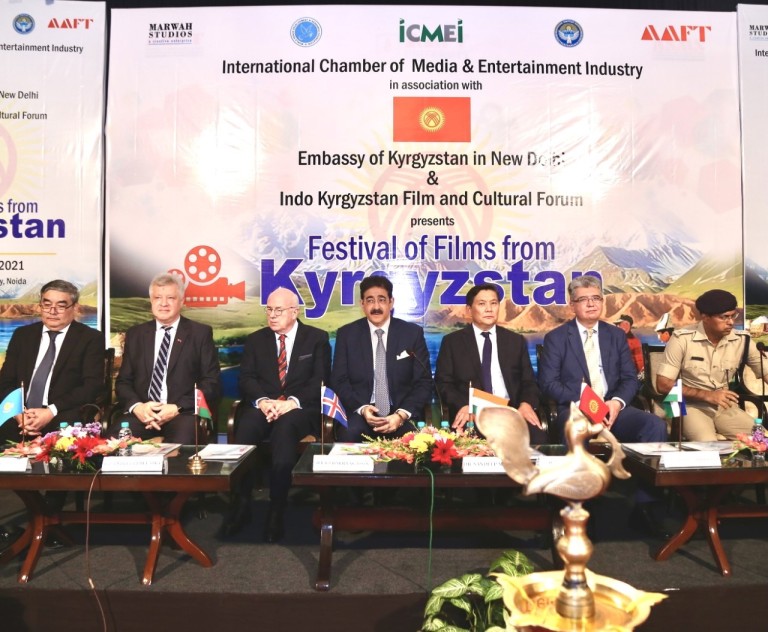 Noida: “Not very long ago we created Indo Kyrgyzstan Film and Cultural Forum to develop and promote relation between the people of two countries through art and culture. The association has grown bigger today with the inauguration of Festival of Films from Kyrgyzstan designed by Embassy of Kyrgyzstan in New Delhi in association with International Chamber of Media and Entertainment Industry at Marwah Studios,” said Sandeep Marwah President of ICMEI.

“Films are the best ambassadors of culture of any country. Film festivals are the best platform to project these cultures. Films have only one language and that is language of emotions,” added Sandeep Marwah also Chair for Indo Kyrgyzstan Film and Cultural Forum. The event started with the exhibition of paintings and photographs from Kyrgyzstan followed by fascinating fashion show by the students of AAFT School of Fashion and Design inspired by the culture of Kyrgyzstan.

“Two-day festival will show case three very important and popular films from Kyrgyzstan. The film festival today in association with ICMEI is one of the major programs to celebrate 30 years of Independence of Kyrgyzstan. It will be followed by many other interesting art and culture programs as a part of festivity. I am thankful to everyone who all have come and brought best wishes to our association,” said H.E.  Ambassador of Kyrgyzstan to India.

The audience was shown a classic film based on the work of Chyngyz Aitmatov: “Mother’s Field”, as well as feature films of Kyrgyz filmmakers of a new generation “Kurmanzhan Datka” and “Song of the Tree”.All Kyrgyz films made a strong impression on the audience and were highly appreciated by the honoured guests of the ceremony.

“The cultural activities like film festival brings lots of positive energy. Cinema is not only entertainment, but it also teaches us many more things in life through well carved stories,” said Deputy Commissioner of Police Noida.

Later Sandeep Marwah presented mementos to all the dignities. A research book prepared by the AAFT School of Fashion and Design was also handed over to H.E. Ambassador of Kyrgyzstan to India.