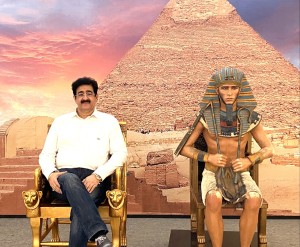 Noida: Thirty years in films, television, art and culture promotion, Marwah Studios has emerged as the biggest contributor to the promotion of art and culture in this part of the World under the leadership of Sandeep Marwah, now a well-known international personality.

Marwah studios is the designer and promoter of Noida Film City-the first film city of North India and fourth in the Republic of India, where Dr. Marwah has been involved since 1986 from the inception of the project. Today Noida Film City is one of the fastest growing film city in the World carrying sixteen studios and 350 TV channels are being broadcasted to 162 countries 24×7 from here. Around 17000 media professionals are working here, whereas the cascading effect leads to involvement of more than one lac fifty thousand people who have been able to earn their bread from this place.

Marwah Studios has been the birthplace for Asian Academy of Film and Television. AAFT has churned out 19000 students hailing from 145 countries of the World learning Indian art & culture since 1993.

International Film and Television Club of Marwah Studios has been conducting more than ten festivals every year and has been able to promote film tourism and culture through Global film festival, Global Festival of journalism, Global fashion Week, and Global literature festival attracted so far three million people from all over the World to Noida Film City.

Marwah Studios has been connected and supporting more than 200 art and culture organizations from all over the World and developed a beautiful interaction globally. Radio Noida and MSTV are also the supporters of art promotions round the year. More than 30,000 times Marwah Studios have been covered by media for their untiring contribution to the art promotion. More than 700 times the organization has been honored from all over the World.