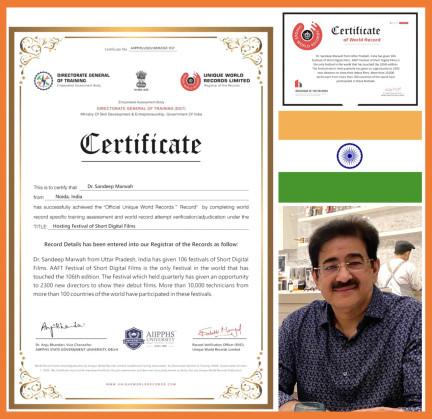 Dubai: “I am thrilled that another activity of Marwah Studios has been recognized and has been approved by the Unique World Records. I have never worked for awards, rewards or any records but continuous working in the same field   and industry has given us this status,” said Dr. Sandeep Marwah President of Marwah Studios on receiving certification of another international recognition.

Out of all these festivals, AAFT Festival of Short Digital Films is the only festival in the World which has touched 106th Edition and is being organized four times a year. More than 10,000 technicians and 2600 directors from more than 100 countries have showcased their debut film in this festival, now which is the World Record.

The staff and administration of Marwah Studios celebrated the recognition at the studios at Noida Film City. The information was delivered in a press conference.(ANA)