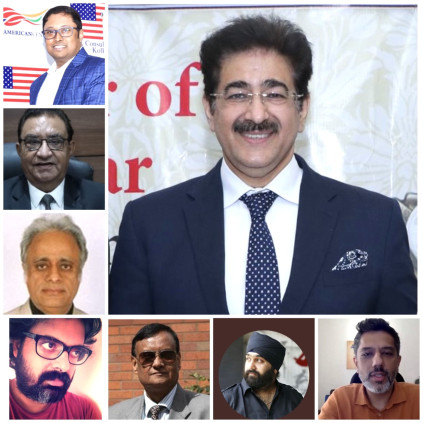 Raipur: “Digital technologies that are backed by computers and the Internet have hugely impacted the concept of Mass Communication. Social platforms, blogs, video games and online news portals can be collectively called the New Media,” initiated Dr,. Sandeep Marwah President AAFT University in a webinar to discuss about New Media.

“It serves as the foundation for Digital Media Marketing and has an extra element of interactivity which is largely missing in the traditional form of communication. Digital Media  combines digital technologies that enhance its reach and gives the audience liberty to interact at their own convenience,” said Ramesh Meer a veteran in special effects from Indian Film Industry.

“There are several types of new media that are used in the market today. However, if we try to bring them under one spectrum, it will be tough as mediums of communication changes every year with new inventions. There are so many options available in today’s Websites, Social Media Platforms, OTT Platforms like Netflix, Blogs, Virtual and Augmented Reality, Email, Music Streaming like Spotify Graphics, animation, special effects,” explained Harkirat Singh renowned editor and former student of AAFT

“New and traditional media are two different spectrums of the current methods of communication. Although both have the same primary function of sharing information, the biggest difference lies in the medium used by the two types of media,” said R.K.Singh former Engineer in Chief Doordarshan, Ministry of Information and Broadcasting, Government of India.

Well known producer Vevek Paul described the planning and designing of a full length feature film on new media formats. He discussed about his own film which has been carved out of blue screen- chroma.

Arjit Bhatacharya talked about his business in new media and his association with large number of feature films right from making to marketing with the help of new media. Ashok Tyagi Secretary General International Chamber of Media And Entertainment Industry, Dr. Shikha Verma Director AAFT University and AKN Sebastian also expressed their views on the same.