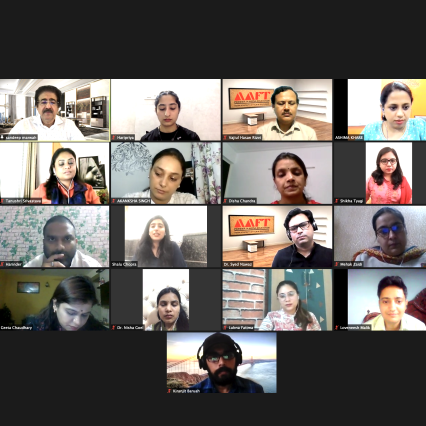 New Delhi: Twenty-Seven years in education of Mass Communication and Journalism and churning out some of the best talents of India AAFT School of Mass Communication and Journalism is the best in the country. Look out the 360-degree development of this school in last so many years,” said Dr. Sandeep Marwah President of AAFT Group of Colleges in a meeting with faculty.

We have the best syllabus for short term and long-term courses supported by World class infrastructure of our own audio, video, film, still photography studios. Ample equipment to accommodate hundreds of students of journalism. The best environment any student can dream of when he is operating from a film studio surrounded by large number of international channels and stationed at the fastest growing film city in Noida.

The institution has been bestowed upon the best of the awards from India and abroad. Students become part of commercial bodies soon they are admitted like Radio Noida, Radio Raipur, MSTV, Asian News Agency, Asian Event Management, Asian PR Agency, Marwah Films and Video Productions and get enough opportunity to write, produce, direct, shot, edit their own programs for all the mediums of media.

The faculty new and old noted down the different schemes launched by the President during the working months for the students including International Cell Phone Cinema Competition, Earn while Learn, Adopt a country for International Exposure, etc.