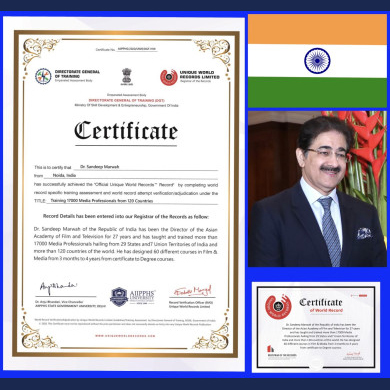 New Delhi: Sandeep Marwah is the only Director of a film school for twenty-seven years and has trained more than 17000 students hailing from all the states & Union Territories of India and 120 countries of the World. Dr. Marwah has designed 60 different courses from three months to four years and from Certificate to Degree courses now is the international record approved by Unique Book of World Records.

“What a pleasure to learn the approval of my second record in media. When these twenty-seven years have passed, I did not even realize. I am proud of my students who all have done extremely well and created a wonderful name for themselves and for the institution too.,” said Dr. Sandeep Marwah Director of Asian Academy of Film And Television thanking the authorities for their approval.

Asian Academy was launched in the year 1993 and its been 27 years. This was the fourth film school in the country and    first in the private sector. Now AAFT is an international brand. The institution has been rated as the first ten best film schools of the World informed Dr. Anju Bhandari Vice Chancellor AIIPPHS State Government University, Delhi.