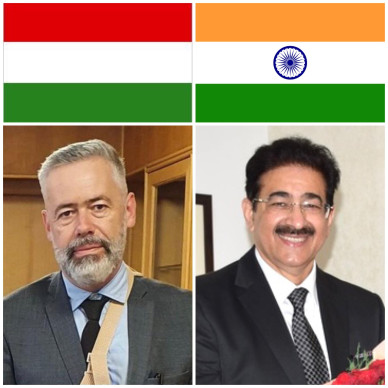 New Delhi: “I on behalf of ICMEI, complete media and entertainment Industry and art & Culture Fraternity of India take this wonderful opportunity to extend my heartiest congratulations to H.E. András L. Király Ambassador of Hungary to India and people of Hungary on the National Day falls on 15th March,” said Dr. Sandeep Marwah President Marwah Studios and International Chamber of Media And Entertainment Industry.

Sandeep Marwah is the only Indian who has been honoured six times at Hungary on different occasions including by Ferenc Borbely renowned actor Film & TV Producer of Hungarian Film Producers Association in the presence of H.E. Kumar Tuhin , by director Jiri Menzil &  Gabor Kindl at Shoot for Life & Shoot for Earth  Hungarian Film Festival in the presence of Oscar wining director István Szabó.

Sandeep Marwah also presented with an award by Tibor Biro & Dr. Akos Kriza, Mayor of the City at Jameson at Cinefest Miskolc International Film Festival in the presence of H.E. Malay Mishra, by Dr. Phd. Kiss Robert Richard renowned journalist and President of the festival at International Cellphone Cinema festival and by  Judith Rachel Lazar & Edit Osko in the presence of H..E. Rahul Chabra at Budapest.

I am thankful to the country of Hungary and the creative industry of Hungary for nominating me as the Chair for Indo Hungary Film And Cultural Forum which is doing its duty of bring people of two countries together through art and culture,” added Dr. Marwah recollecting his  last visits to Budapest.