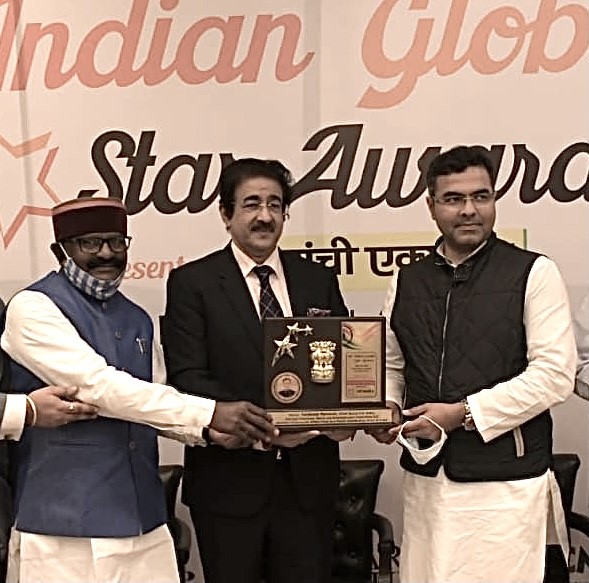 New Delhi: Dr. Sandeep Marwah seven times World Record Holder is the only media person to be nominated Chancellor of the media & Arts University, Chief Scout For India and National Chairperson of media & Entertainment upgradation Committee of Government of India in Ministry of Consumer Welfare and Public Distribution.

“I admire his passion for work. He is an asset to the country of India,” said Ram Kumar Verma Member Parliament Rajya Sabha while presenting the International Media Guru Award to Dr. Sandeep Marwah in a grand function on the occasion of 6th annual Global Star Award at Hotel Le Meridien, New Delhi.

“We are proud of Sandeep Marwah and his achievements. He is a well-known international person with ample work to his credit. He has set an example to the World,” added Parvesh Verma Member Parliament Lok Sabha.

Dr. Sandeep Marwah has so far been honoured with seven Honorary Doctorates and hundreds of national and international awards for his untiring contribution to films, television, media, art and culture. He has been nominated by more than 50 countries of the World as their cultural Ambassador.

“I am thankful to everyone present here for your love and affection. My mission is to bring love, peace and unity through art and culture,” thanked Sandeep Marwah.