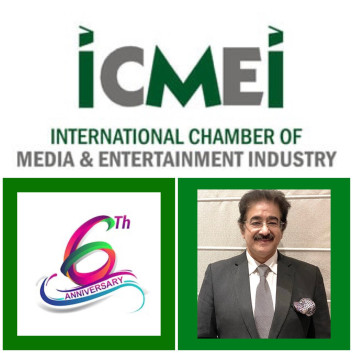 New Delhi: The sixth year of ICMEI International Chamber of Media And Entertainment Industry was celebrated with great pomp and show during the day 13th Global Film Festival Noida 2020 with dignities from all over the World.

“ICMEI was planned way back in 2014 to support the vision of our Prime Minister Shri Narendra Modi to have best of the relations possible with each and every country of the World through art and culture. This is the first of its kind in the World where Chamber is solely dedicated to films, television, media, art and culture,” said Dr. Sandeep Marwah founder President of ICMEI on the completion of 6th year of its international operations.

ICMEI has created by now 190 International Committees related to each and every country of the World. Out of these ICMEI has interacted and reached to 145 countries and 60 forums have been launched so far in six years.

CMEI is now associated with large number of International, National, Private and Government Organizations to bridge the gap between the industry to Government and Industry to Industry. It has been rated as one of the most successful Chamber of Commerce in recent times.

“I am thankful to everyone who all have contributed in the success of Chamber and on the completion of six years. My special thanks to the core team of Secretary General Ashok Tyagi, and Directors Viney Sabikhi, Sushil Bharti, Rajiv Mathur and Haripriya Thakur.