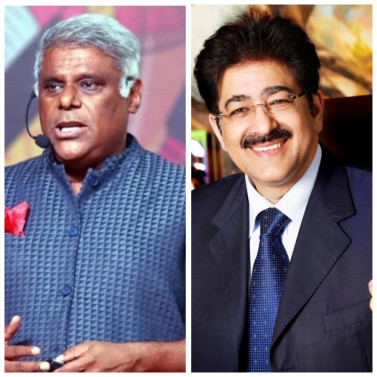 New Delhi: The role of a teacher in a young student’s life goes beyond just education. They’re a leader, a role model, a coach, an advisor and a facilitator of positive growth. With students spending most of their working hours at institution, it’s up to teachers to create a positive and inspiring environment where children can do their best work,” said Dr. Sandeep Marwah Chancellor of AAFT University introducing renowned actor and motivator Ashish Vidyarthi to the students of AAFT.

“There is no alternate to hard work, success comes to those who invites the success. Dreaming success is the first step to achieve something in life. Life is nor bed of Roses. The seat at the top is always vacant. You must learn as much as you can, this is the right time to gather knowledge. The man who does not read books has no advantage over the one who cannot read them. Education is the passport to the future, for tomorrow belongs to those who prepare for it today,” said Ashish Vidyarthi while answering the questions of new batch of AAFT University. He won the hearts of the students by expressing his own journey full of struggles and hardships.

Ashish Vidyarthi is an Indian film actor and motivational speaker, known for his work in 11 different languages, predominantly in Hindi, Telugu, Tamil, Kannada, Bengali, Malayalam, English, Marathi, Odia, and Bhojpuri cinema. He is noted for his antagonist and character roles. He also acted in the TV serial, Ham Panchi Ek Chal Ke. In 1995, he received the National Film Award for Best Supporting Actor for Drohkal. He is also known for his roles in 1942 A Love Story, Kaho Na Pyar Hai, Haseena Maan jaayegi and many others.