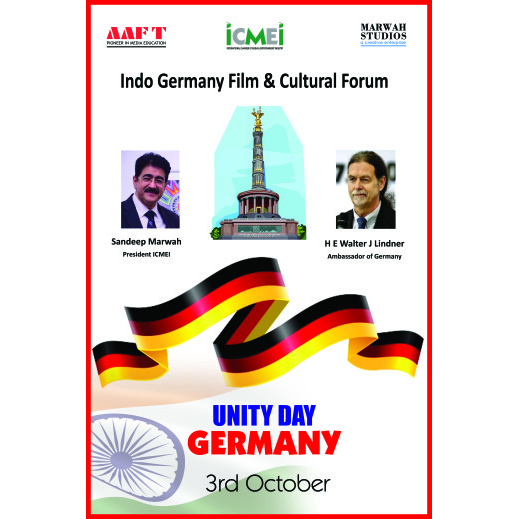 New Delhi: “I on behalf of the complete media and entertainment, Art and Culture industry of India extend my heartiest congratulations to H.E. Walter J Lindner Ambassador of Germany to India and the people of Germany on the auspicious occasion of Unity Day of Germany which falls on 3rd October,” messaged Dr. Sandeep Marwah President of International Chamber of Media And entertainment Industry.

“My trips to Germany have been very successful. I had the pleasure and honor to meet the some of the most important and influential people from Munich. I was also honored in Munich Parliament, that was the time when we launched Indo German Film And Cultural Forum to develop and promote relation between two countries through art and culture,” added Dr. Sandeep Marwah also Chair of Indo German Film And Cultural Forum.

Visit of German business Delegation and performance by German Artists at Marwah Studios were few of the events added to our relations. There is a chapter on Germany which has been recently created by AAFT University of Media And Arts in India. Our motto of ICMEI is to spread love, peace and unity through art and culture.