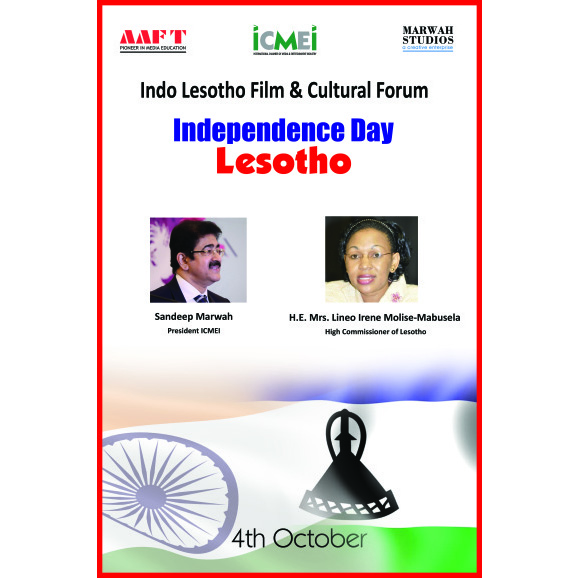 New Delhi:” I on behalf of media And entertainment Industry & Art and Cultural Fraternity of India extend my heartiest congratulations to H.E. Lineo Molise Mabusela High Commissioner of Lesotho to India and the people of Kingdom of Lesotho on the auspicious occasion of National Day of Lesotho,” said Dr. Sandeep Marwah President of Marwah Studios and ICMEI.

A serious meeting started when A delegation of 14 senior officers of Government of Lesotho under the leadership of the Principal Secretary Office of the Prime Minister of Lesotho Ms Mataeli Makhele visited Marwah Studios and proposal of creating Indo Lesotho Film And Cultural Form was thrown on the table in December 2017.

It was followed by signing of MOU between International Chamber of Media And Entertainment Industry and High Commission of Lesotho in India through H.E. Bothat Tsikoane then the High Commissioner and Sandeep Marwah  President ICMEI to promote the activities between the two countries through art and culture. Dr. Sandeep Marwah was nominated as the Chair for Indo Lesorho Film and Cultural Forum.