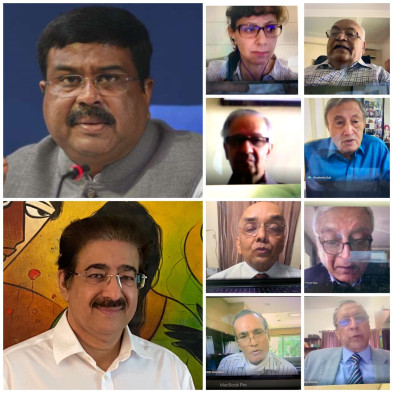 New Delhi: “We are very enthusiastic  today that not only we have completed four years of our existence but we have achieved what we planned four years back. A small tiny organization which started from whatsAap group today has reached all over India and abroad with almost 500 members from all strata of life,” said Dr. Sandeep Marwah Member of the executive council of GCTC and President Marwah Studios.

“It is also a big day as our new organization GEEC- Global Energy and Environment Council is being inaugurated by our Honourable Union Minister for Petroleum and Natural Gas, Dharmendra Pradhan on this auspicious day when we are also conducting the first  Energy Security Conference,” said Aditya Tikoo Convenor GCTC and GEEC.

The organization has touched more than 80 events covering different topics in relation to government policies, public interest including economic, political, social and cultural issues. Who’s Who of the country is contributing to this organization converting into a knowledge bank and national advisors to many setups.

The Minister congratulated the whole team of GCTC on the launching of GEEC and also formally inaugurated the Energy Security Conference.