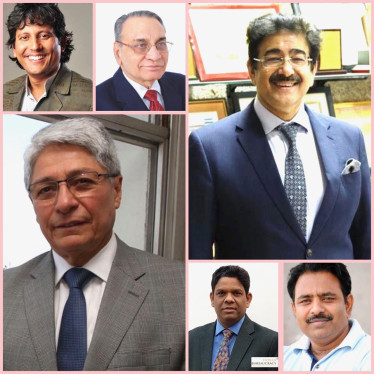 “Art and culture Is the only way to bring the whole world together. We may have different ideologies, political, social and economic goals but emotions still remain the same. We are happy that today we are beginning with 6th Global Literary Festival which will give you enough to inform, educate and to entertain,” said Sandeep Marwah President of Marwah Studios and GLFN 2020 declaring festival open with Love, Peace and Unity through Literature as theme of the program.

“The principal of art is not to portray but to evoke, it evokes the mystery without which World cannot exists. The first step to controlling your world is to control your culture. To model and demonstrate the kind of world you demand to live in. to write the books, make the music. shoot the films, paint the art. I wish the organizers a very effective and powerful festival,” said H.E, Carlos Polo Ambassador of Peru to India while inaugurating the festival.

Aakashditya Lama film maker and Script writer known for his films like Tauba Tera Jalwa, Chanda Mama Dur Ke, Nani Teri Morni, From The Land of Kamasutra, etc. congratulated ICMEI and Asian Academy of Arts on its sixth edition of festival and shared his experiences of Indian Film Industry. He guides and said that, ”To create one’s world in any of the arts takes courage,”.

Pawan Kumar IAS writer and Special Secretary, Language Department Govt. of U.P. motivated all the writers to come forward and participate in these kind of events as these events are the best showcases of art and culture especially writing. “Throw your dreams into space like a kite, and you do not know what it will bring back, a new life, a new friend, a new love, a new country,” respect all arts he said.

Renowned author & poet  Shailendra Sail whose popular books like Tanha Saya, Smiritiyon Ka Baaiskop, Kavita Main Sabkuch Sambhav, etc. said, ”An Art is an effort to create, beside the real world, a more humane world.” He emphasised on literary festivals and congratulated that even during pandemic a festival of that stature, Asian Academy of Arts could organize.

To give respect to the great leader and political activist a Poster of Ram Manohar Lohiya was launched from the stage of Asian Academy of Arts by all the dignities present there. A book titled ‘Swatantrata Senani Shri Ramesh Mehta’ written by  Poornima Roy was also released. Festival Director Sushil Bharti paid vote of thanks. GLFN was supported by International Chamber of Media And Entertainment Industry and AAFT University of Media And Arts.