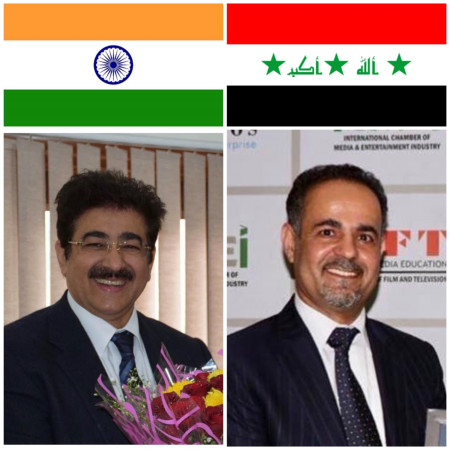 New Delhi: “I on behalf of ICMEI and Indian Media and Entertainment Industry take this opportunity to extend our heartiest congratulations to H.E. Dr. Falah Abdulhasan Abdulsada Ambassador of Iraq to India and people of Iraq on the national day of Iraq which falls on 14th July,” said Dr. Sandeep Marwah President of International Chamber of Media And Entertainment Industry while celebrating the day on web.

The bilateral relations between the Republic of Iraq and the Republic of India have traditionally been friendly and collaborative. Cultural interaction and economic trade between Indus Valley and Mesopotamia date back to 1800 BCE. The 1952 Treaty of Friendship established and strengthened ties between contemporary India and Iraq. By the 1970s, Iraq was regarded as one of India’s closest allies in the Middle East.

The formation of Indo Iraq film and Cultural Forum is a step to promote ties between two countries through art and culture. Dr. Sandeep Marwah has been Chairing the forum and ample has been done under his leadership.