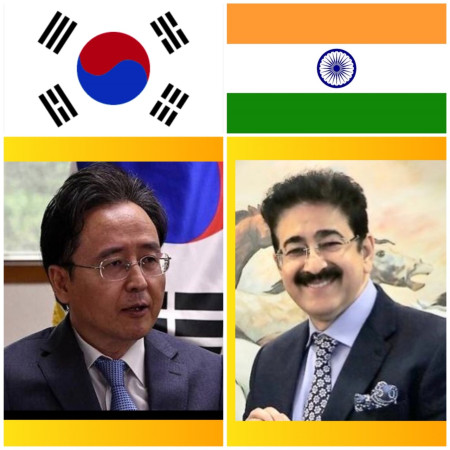 New Delhi: Constitution Day in South Korea is observed on 17 July, the day that the South Korean constitution was proclaimed in 1948. The date was deliberately chosen to match the founding date of 17 July of the Joseon dynasty.

“I on behalf of ICMEI and complete Indian Media And Entertainment Industry of India extend my heartiest congratulations to H.E. SHIN Bongkil Ambassador of Republic of Korea to India and the people of South Korea on this very important constitution day which falls on 17th July. May Republic of India and Republic of Korea be the best of friends for ever,” said Dr. Sandeep Marwah President of ICMEI and Chair for Indo South Korea Film And Cultural Forum.

The two visits of Dr. Sandeep Marwah to South Korea on the invitation of International Youth Fellowship added a lot to the relation between two countries. First it was Seoul and second time it was Busan where Dr. Marwah met many people associated with films, television, media, education, art & Culture. Dr. Marwah is now an International advisor to IYA with office in 90 countries of the World.