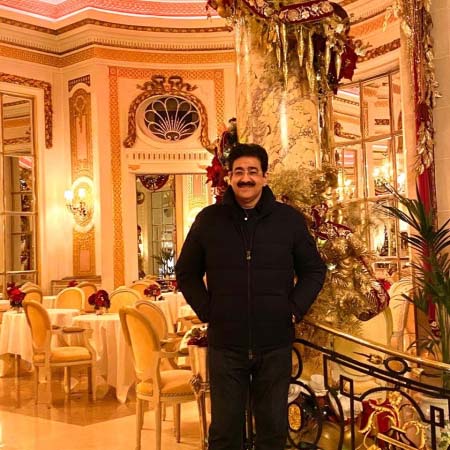 London: “It was in 1986 December when I submitted the project of Noida Film City to Noida Authority as there was no one in Delhi to listen to me. I knew it that it was difficult to look for 100 acres in Delhi, thank God I opted Noida,” Sandeep Marwah founder of Noida Film City started talking to young journalist on his favorite subject- Films, sitting back in the lobby of Hotel Ritz, Piccadilly, London.

“We were six and then twelve   and now sixteen players in this film city who managed to get allotment in twenty-five acres of indoor planning of film city Noida. It is sad that many people  to whom we brought with great persuasion they have resigned from the board including Boney Kapoor, Tutu Sharma, F.C. Mehra, Pooranchand Rao, L.V. Prasad, Yash Chopra, Vinod Pandey, B. L. Sobti, Pooran Sarin without realizing the importance of Noida Film City,” added Sandeep Marwah. I knew that Sandeep has been honored hundreds of time for his untiring contribution to this industry.

“We are on the World map of cinema today. More than 350 Channels are being broadcast to 162 countries 24 by 7. Approx. 17000 media professionals are working here in three shifts of 8 hours each. The cascading effect is that more than hundred and Fifty thousand people are earning their bread because of film city. I am happy I could do something for the nation, and definitely for media and entertainment industry,” said Marwah emotionally.

Thirty years back I gave one word to English dictionary i.e. Film Tourism and nobody paid heed to what I said, today every country is talking about film tourism. You know that Noida film city has already attracted more than two million tourists under film tourism from all over India and 145 countries of the World. Marwah looked up as if thanking God for listening to him.

Today Noida Film city is the home to the first Professional Film Studios of North India- Marwah Studios. It is the base to first private film school of the country Asian Academy of Film And Television. It is the ground for four biggest international events Global Film Festival, Global Festival of Journalism, Global Literary Festival and Global Fashion week. Who’s who of the World has already been here.

Marwah with little hesitation uttered that I have been honored with seven honorary Doctorates for being founder of Noida Film city. I am still the spokesperson of this tiny city with almost 75 acres as outdoors also. Long way to go I said.