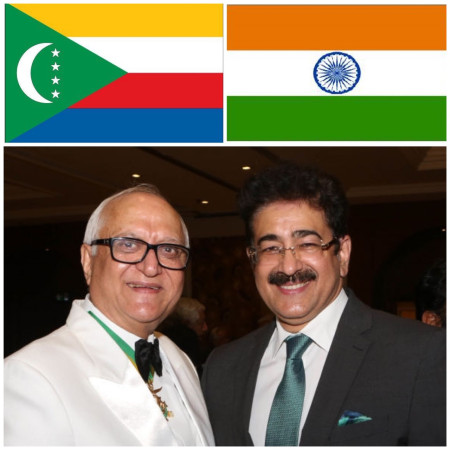 New Delhi; ICMEI extends its best wishes and congratulations on behalf of Media And Entertainment Industry of India to K.L.Ganju the Consul General of Comoros in India on the National Day of the Republic of Union of the Comoros which falls on 6th July.

“I on behalf of Indian Media And Entertainment Industry congratulate Shri K.L.Ganju the Consul General of Comoros in India and the people of Comoros on the National Day of the Comoros. India and Comoros have been friends for ages and I pray for the much stronger ties with Comoros, “ said Dr. Sandeep Marwah President of International Chamber of Media And Entertainment Industry and Chair for Indo Comoros Film And Cultural Forum.

ICFCF- Indo Comoros Film And Cultural Forum has been now part of many major international events of ICMEI with the presence of K.L.Ganju including Global Film Festival, Global Festival of Journalism, Global Literary Festival and Global Fashion Week. Recently a scholarship has also been handed over for the deserving student to study films in India.