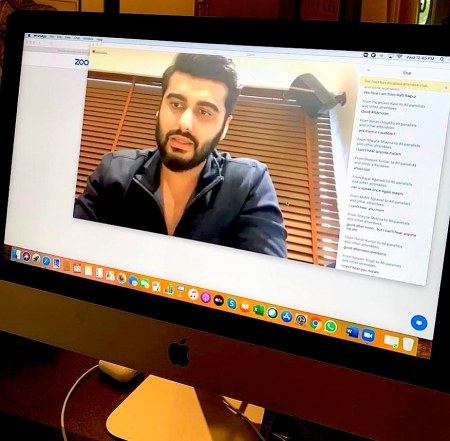 Mumbai: Arjun kapoor appeared on screen to address the webinar organized for the current 2500 students of AAFT University to motivate the students during lockdown because of the pandemic covid 19 when all of them learning their courses on line safely at home.

AAFT is one of the few institutions, which has already started the education for the students on line without wasting even single working day said Albeena Director AAFT conducting the program.

“Ups and downs are part of life, in this case of Covid 19 heath has become more important than few classes of education and training at AAFT. We can definitely later coverup the syllabus but cannot take chance of our health and life which every student has to understand for sure,” said Arjun Kapoor initiated his talk.

Arjun spoke about his films, his tough and good time in the industry, the effect of Covid 19 on Indian Film Industry. He also narrated the commercial aspect of filmmaking and motivated students to get involved deeply when they are at home.

“It is the right time to see films of your choice and you can grasp many new things from Indian and foreign cinema which is available on net. Probably we don’t get time when we are in our routine work. See some of the best dramas on different ott platforms, which are actually out of this world,” Arjun added.

“This is also the best time to revise all that you have been taught in the class rooms. Lets be practical in approach and support government and institution to do their best because no body can think better than your institution about your carrier,” expressed Arjun Kapoor.

He started his acting carrier with Ishquezade with Habib Faizal followed by Auranzeb with AAFTian Atul Sabarwal, Gunday, 2 States, Tevar, Ki& Ka, Half Girlfriend, Mubarkan, Namaste England, India Most Wanted and Panipat are the major big budget films where his performance has been very well appreciated by the national and international audience