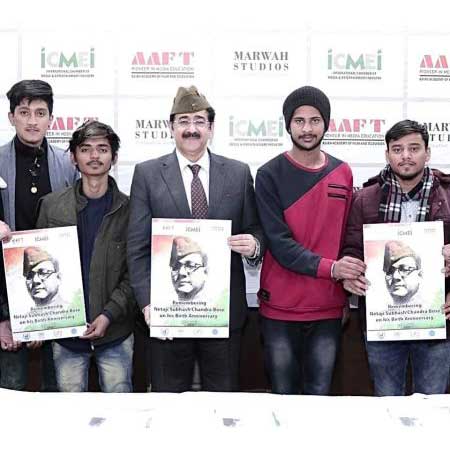 Noida: A poster was launched on the Birth Anniversary of Neta Subhash Chandra Bose to mark respect to the great leader of India at AAFT- Asian Academy of Film And Television at Marwah Studios Noida Film City.

“It is our duty to pay respect to the leaders who all have done commendable work in getting us independence. One such name is Neta Subhash Chandra Bose. –We should Have But One Desire Today The Desire To Die So That India My Live” -Life Loses Half Its Interest IF There Is No Struggle- If There No Risks To Be Taken,” quotes repeated by Dr. Sandeep Marwah Chancellor of AAFT University while addressing the young film makers.

Netaji Subhas Chandra Bose was born on January 23, 1897, in Orissa, Bengal division. He is considered as one of the most esteemed freedom fighters of India who was the mastermind behind raising the Azad Hind Fauj. This force was created to fight the British people and was the first Indian armed force. Subhash Chandra Bose was a true legend in every essence and one of the most decorated freedom fighters who ever fought for incredible India.