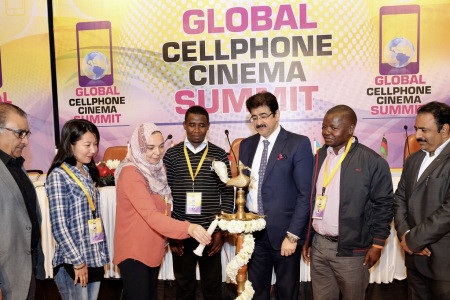 Noida: A grand event was recorded at Noida Film City when International Chamber of Media And Entertainment Industry organized Global Cellphone Cinema Summit at Marwah Studios in association with Ministry of External Affairs and Ministry of Skill Development and Entrepreneurship, Government of India.

“It has been 12 years we have been celebrating International Festival of Cellphone Cinema. The 11th edition is going to be on 12th February 2008. Global Cellphone Cinema Summit is like a curtain raiser to the festival,” said Sandeep Marwah President of Marwah Studios.

“It is a golden opportunity for all of us to be part of Global Cellphone Cinema Summit in India. Never I have attended an event like this,” said Ms Zarour Assia delegate from Algeria while lighting the ceremonial lamp. “We are here in India for the first time, the culture of India is so inviting that we would love to be back soon,” added Venuste Niyirora from Rwanda.

“GCPC Summit has given us ample knowledge to study further and be a part of the festival next time,” said Greno Wanda delegate from Malawi. “ Indian cinema has always impressed us. We are fond of Hindi films and now we are fascinated by the concept of Cellphone Cinema,” said Ms Adibahon Haitmatova from Kyrgyzstan.

The first session was an introductory session of the summit. Sandeep Marwah was nominated for the Chair and Marwah gave ample knowledge about Print, Radio, Television, Cinema, New Media and Media Education to the participants from all over the World.

All the delegates presented their views and share their experiences one by one. Radio Noida and MSTV recorded the event. The delegates proposed the name of Sandeep Marwah for the title “Father of Cellphone Cinema”.