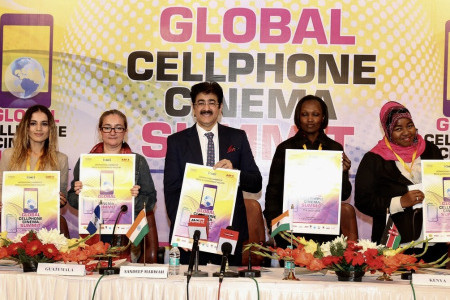 Sandeep Marwah in the second part of the summit introduced the need of cellphone cinema. “We invite you all to be part of International Festival of Cellphone Cinema also. We are expecting more than 600 films from all over the World. Every one will be given participation certificates and there are many different awards for winners too,” said Marwah.

Being in Film City Noida and Marwah Studios is like dream come true. We could not believe that we will be able to see and meet people like Sandeep Marwah,” said Ms Maria Del Rosario Quinonez Ruiz delegate from Guatemala. “ We have learned the culture of India from Indian films, now we are sharing dice with Father of Cellphone Cinema which is like a dream,” added Khabiba Nazarieva from Tajikistan.

“I am feeling that if we would have not been here our trip would have been incomplete. There is so much to learn from India,” said Ms Winnie Muoki from Kenya. “It is one of my luckiest day that I could have been the part of this summit,” added Mrs Sabrina OmarAbdulla, from Tanzania.