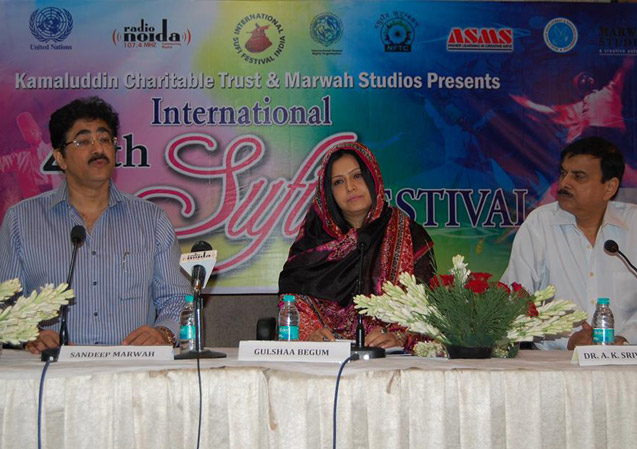 International Sufi festival began as a mark of respect to the Sufi Saint Hazrat Khwaja Moinuddin Hasan Chishty (R.A) to spread his message of Peace and Humanity. ‘After the successful completion of three-major International Sufi Festival in Ajmer, the organizers have decided to shift the venue of this grand musical extravaganza to Noida Film City in the month of December 2014’, informed Gulsha Begum President of the festival while addressing the National Press.

“Marwah Studios has been the partners to the Sufi festival since its inception at Ajmer where thousands of people have enjoyed its presence” added Sandeep Marwah President of Marwah Studios.

The curtain raiser of the festival will be held at Ajmer on 8th November, 2014 followed by three days of events i.e., from 19th to 21st December 2014 at Noida. The festival will feature Sufi films, exhibitions, seminars, workshops and Sufi singers from around the world.

The major attraction of the festival would be the diverse stalls of handicrafts showcasing artisans from all over India. The event has been designed to propagate the Feeling of Love and Oneness and to promote arts and crafts of India.